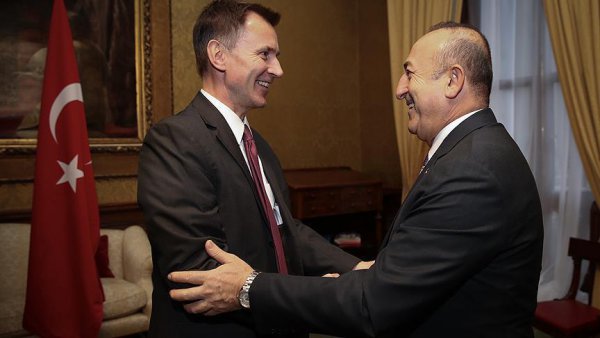 Among the topics addressed in their closed-door meeting was the case of missing Saudi journalist Jamal Khashoggi, which Hunt said remains "deeply concerning".

"The UK fully supports the Turkish investigation into the incident as I reiterated in person to Mr. Cavusoglu today," Hunt said. "We have been urging Saudi Arabia to cooperate fully with the investigation. There remain questions about the disappearance of Mr. Khashoggi that only Saudi Arabia can answer."

He also said they welcome Saudi Arabia's decision to ask the prosecutor general to establish an internal investigation into Khashoggi's disappearance and hold people accountable if the evidence warrants it.

Turkish and Saudi officials arrived earlier Monday at the Saudi consulate in Istanbul for a joint probe into Khashoggi's case.

On the same day Khashoggi went missing, 15 other Saudis, including several officials, arrived in Istanbul on two planes and visited the consulate while Khashoggi was inside, according to Turkish police sources. All of the identified individuals have since left Turkey.

Cavusoglu and Hunt also talked about bilateral and regional relations, the agreement between Turkey and Russia to establish a demilitarized zone in Idlib, Syria, the fight against terrorism and Brexit, according to Turkish diplomatic sources.

A British Foreign Office statement said Hunt "raised the situation in Syria, stressing the importance of ensuring the safety of civilians in Idlib and commended Turkey for hosting over 3.6 million refugees".