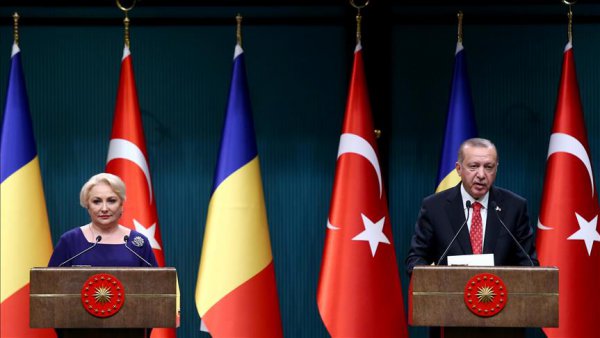 "We foresee an increase this year in our bilateral trade volume, which stood at around $6 billion in 2017. During our bilateral talks, we agreed to increase this to $10 billion," Erdogan said at a joint news conference with Romania's Prime Minister Viorica Dancila at the Presidential Complex in capital Ankara. Erdogan said over 15,000 Turkish firms are active in Romania in the areas ranging from banking to media and from construction to manufacturing.

"We will continue to support our businesspeople's investments in Romania," he added.

Erdogan noted the Turkish-Romanian relations were raised to the level of a strategic partnership in 2011.

He said Turkey expects from Romania to continue its cooperation against terrorist organizations.

"We will not forget the solidarity of Romania with our country after the July 15 FETO coup attempt," the president said.

Fetullah Terrorist Organization (FETO) and its U.S.-based leader Fetullah Gulen are accused of orchestrating the defeated coup of July 15, 2016 which left 251 people martyred and nearly 2,200 injured.

Ankara also accuses FETO of being behind a long-running campaign to overthrow the state through the infiltration of Turkish institutions, particularly the military, police and judiciary.