'US remarks on 1915 bowed down to lobbyists' demands' 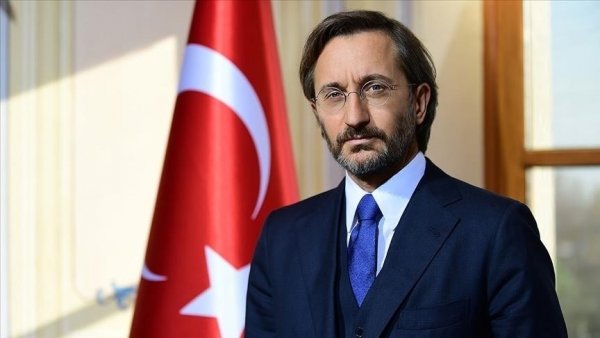 24 Nisan 2021 Cumartesi, 19:50 US attitude on events of 1915 is unrelated to historical facts, only reflects lobbying activities, says Fahrettin Altun


Rejecting US President Joe Biden's remarks on the events of 1915, Turkey's ​​communications director said on Saturday that US officials ignored history to bow down to the demands of lobbyists.

"Turkey rejects and strongly condemns US President Joe Biden's definition of the 1915 events as genocide. We consider the statement, which is devoid of all legal and scholarly legitimacy, as null and void," said Fahrettin Altun in a statement.

Stating that the remarks lend support to the Armenian diaspora's baseless slanders and are rooted in US domestic political calculations, Altun said they not only fail to help Armenians get out of their difficult situation but also ill-serve US interests. "The Biden administration's decision to mis-portray history out with an eye on domestic political calculations is a true misfortune for Turkey-US relations. It is wrong and damaging to label the 1915 events as anything but a tragedy," he underlined.

Mentioning how Turkey's history is founded in cultures coexisting in tolerance and peace, he stressed that what happened during World War I must be evaluated within the context of "European imperialism and the disintegration of an empire."

"By taking this latest step, the current US administration not only fails to appreciate the richness of the history which we share with our brothers and sisters in these lands, but also attempts to exploit the struggle of our entire nation for its own narrow political calculations," he added.

Citing President Recep Tayyip Erdogan's efforts to recognize historical tragedies and the pain of the common past, Altun added however that Erdogan had opposed, consistently and decisively, any attempt to "weaponize" history against countries or nations.

"Our President has repeatedly called on historians, intellectuals and other thinkers to come together and present a scholarly approach to the 1915 events. He stressed that we were neither afraid nor ashamed of the realities of our history," he added.

"The mischaracterization of our history in a politicized and deliberate manner will not stop us from welcoming and protecting our brothers and sisters, with whom we share a common destiny," Altun noted.

Stating that Turks and Armenians, along with many ethnic and religious communities, have lived together for centuries, he added that Turkey still remembers how millions of the Ottoman Empire's Muslim and Christian subjects suffered the horrors of imperialism and war during World War I and respects their memory.

"Moreover, we do not let those tragic events define our relations with our neighbors today. We do not harbor grudges or hostility towards any country, including Armenia. Our initiatives so far to advance our relations with Armenia, on the basis of mutual respect, are proof of this, and no diaspora group can change that fact," Altun added.

Lamenting that this is an "extremely unfortunate and saddening day" for Turkey's bilateral ties with the US, due to Washington choosing to cast a shadow over Turkey's honorable history, Altun said Turkey absolutely rejects the Biden administration's labeling of the 1915 events as "genocide."

"The US authorities have unfortunately bowed down to the demands of certain lobbies by making the statement. We would have expected them to take into consideration earlier statements by Sahak Mashalian, the Patriarch of Turkish Armenians, and Pedros Sirinoglu, President of the Association of Armenian Foundations, where they urged certain countries to refrain from exploiting past sufferings for short-term political gain, and to have noticed the great difference between indisputable facts and malevolent lobbying campaigns," Altun said.

Earlier Saturday, Biden called the events of 1915 a "genocide," breaking American presidents' long-held tradition of refraining from using the term.

Turkish stance on events of 1915