‘US statement on 1915 events has no legal basis’ 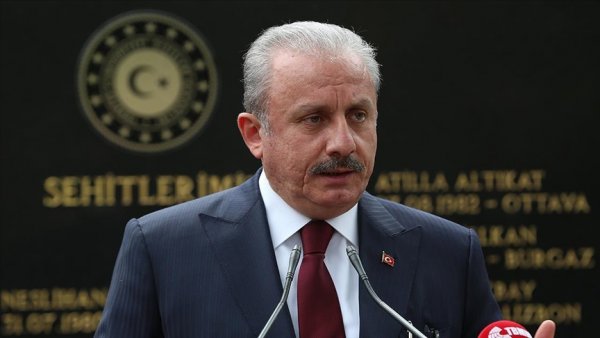 24 Nisan 2021 Cumartesi, 19:36 Turkish parliament head says ‘none of the conditions specified in law exist for 1915 events to be defined as genocide’


A statement by the US president on the events of 1915 events will be merely "a political statement with no legal basis," said the Turkish parliament speaker on Saturday.

"None of the conditions specified in the law exist for the 1915 events to be defined as genocide," said Mustafa Sentop, while visiting gravesites in the Turkish capital Ankara of diplomats and their families martyred by Armenian terrorist groups.

"This concept, indicating a clearly defined crime, can only be issued by a competent court, as stated in the 1948 Genocide Convention," he added. He went on to say that Armenia resorted to parliaments of third countries plus regional and international groups to politicize history after having failed to achieve any success in recognizing its claims on a historical or legal basis.

He underlined that the principle "do the messenger no harm," which prevailed in diplomacy for centuries, was violated by Armenian terrorist groups during the assassination of dozens of Turkish diplomats in previous decades.

"The responsibility for these (terrorist) actions has been accepted by these groups, and it should be enough to shame the states that most of the suspects have not been properly judged," he added.

Citing the principle that women and children should not be harmed even in war, he said: "Ignoring this principle, it is still in our minds that our embassy's administrative attaché, Galip Ozmen, was martyred (in 1980) with his 14-year-old daughter Neslihan Ozmen in the middle of Athens."

He stressed that Turkey continues its initiatives for the reopening of the cases of martyrs whose murderers were never found.

On Saturday, after Sentop's statement, US President Joe Biden characterize the events of 1915 as a "genocide."